Review of Shadow Cast by Stars by Catherine Knutsson 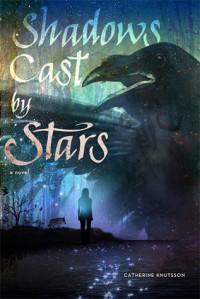 Shadows Cast by Stars was a brilliant young adult book. Knutsson’s writing was captivating; you could tell her original story came from her heart. I believed it was going to be my favorite book until I got to the final quarter of the book. The world building and feelings were going along so great and then the story took an unexpected turn.

In the beginning, Knutsson paints a setting that is mixed with Native American myths and the currently bad atmosphere of the main character Cassandra’s future world. Cassandra, her twin brother, and their father are what is known as “others”, they live in the outlying part of The Corridor. “Other” blood is a commodity and there are “searchers” constantly hunting them. So far, her family has been quietly living “the old way” with no running water and minimal Corridor influence. Then, suddenly, they are warned that the searchers are coming and the only refuge for “others” is an island filled with what is left of old Native tribes.

Knutsson does a wonderful job of detailing what it is like to be an “other” in a society, as well as being persecuted for being different. I believe Shadows Cast by Stars is a story that is told from the author’s hopefulness of her own world and what it means to live as a unique human being. It was so easy to fall in love with the setting, it made me feel like I was a young teenager again and wondering what it means to be an outsider to my own ancestral roots. This character connection will always be a reminder to what it was like in my head when I was young.

With that said, the story took a turn for the... boring. It went a completely different route than what I was expecting. Instead of following the journey of Cassandra’s life, the story was led literally into the spirit world. I found that part boring and a little overwhelming. So much storytelling in a story itself was just not my thing.

While there were Native aspects of life and apocalyptic-type problems, the romance was okay. It just felt forced. With so many things touched upon by Knutsson in the Native world, from alcoholism, to storytelling, and shunning; I felt that the "romance" and creepy/abusive characters were issues should have been resolved by the main character, it made me a little angry.

With such a beautiful story, I felt that some of the characters could have been left out, among other things... Unless she plans on making it into a series. Then, I would be all over that. Maybe the ending would be okay, and the characters I didn't like could be built upon in the future. I don’t know if this will ever happen because it seems like Knutsson wanted this story told this way.

I do still love this book, even with its flawed ending, and intend to buy it to have one of the pretty covers on my shelf one day. Either one is gorgeous.